How to Form a Habit

Editor’s Note: this post is inspired by Gary Keller’s blog and book, “The One Thing.” Keller argues our workload and quality of life increases by asking “what is the one thing you can do such that by doing it everything else will be easier or unnecessary?” As 2020 begins, harness the power of habit-forming (and keeping!).

“What is the ONE THING you can do such that by doing it everything else will be easier or unnecessary?.”

Main point: find and make the most important habit in any given area

Habit formation relies on context-dependent repetition. Think about it. Habits that stick with you, like brushing your teeth or going for a run each morning, are both a behavior and a situation. By repeating the behavior in the same scenario, the behavior starts to feel instinctual.

How does the brain support habitual behavior, and how long does it take to change your mind? 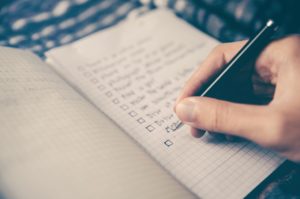 Your Brain on Habits

In your brain, there are spaces between cells that relay impulses. These synapses facilitate thought and action.

If something is done over and over again, it is easier for the impulse to be relayed, via the synapse, from cell to cell.

Viola! Your brain forms a habit–an action on auto-pilot.

While it may take from 18 to 245 days to form a habit, there are many variables that impact this time play.

Habit Formation Depends on the Person and Habit

Just as some people are naturally more disciplined than others, a person’s unique experiences and personality and psychological factors also impact their ability to form a habit.

If the habit is complex, takes time to do, or requires exertion, it helps to be aware of these roadblocks. You’ll have to work hard to overcome these obstacles to forming the habit.

8 Tips to Creating a Good Habit

Main point: Habit formation is totally doable, if you use a strategic plan and are consistent.

What is the one habit such that by doing it every other part of my life is improved or no longer necessary?